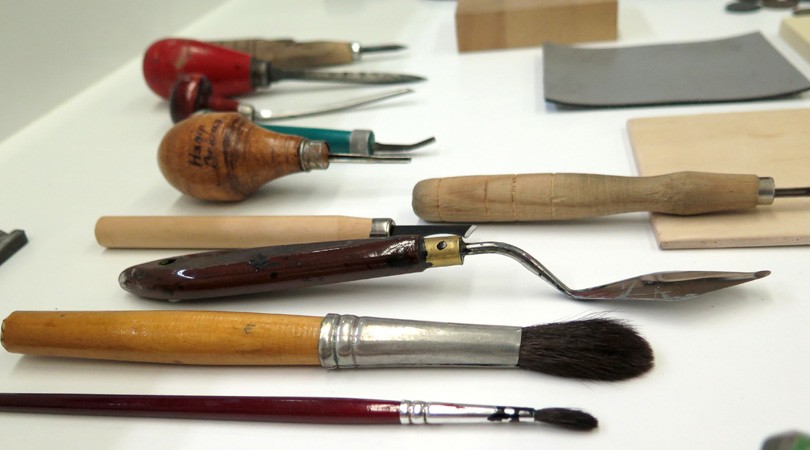 The first list of symbols of techniques used in creating and printing ex-libris was adopted in 1958 at the Barcelona Congress of FISAE. However, a major revision was needed.
A revised list, given below, was adopted at the XXIX Congress, Frederikshavn DK, in August 2002.
The list was prepared on the basis of the following principles:
– unnecessary changes were avoided as they would render earlier references invalid and thus create confusion. No major corrections of inscriptions in existing collections should be necessary.
– the list is limited to symbols for techniques used in printed ex-libris – i.e. abbreviations for non-printmaking techniques (drawing, pastel, etc.), or for styles (‘heraldic’, ‘calligraphic’, etc.) were excluded.
— the list does not include obscure and rarely used techniques, but remains generic, with the flexibility to be adapted perhaps again at a future date.
– the list differentiates between original and reproductive processes, as this is an important factor for collectors.

C – Intaglio printing (blank); embossing. The word ‘embossing’ was added in the English version, as it is a commonly used term.
C1 – Steel engraving Remains as it was in the 1958 list. It is a very specific process, which must not be confused with etched-steel printing, which bears P10.
C2 – Burin (graver or gouge) engraving, notably on copper This takes into account the fact that fewer artists use copper today than other metal supports, and that zinc and other metals are commonly worked with the burin, a traditional tool whose mark on the plate is easily recognisable.
C3 – Etching This term describes the widely-used scratched hard-ground etching, and is meant to cover also direct brush or pen etching.
C4 – Drypoint This form of engraving is easily recognised by the ‘burr’ on printed lines. Its tool or ‘needle’ can be used for stippling or in ‘crayon’ manner, as a mechanical method other than burin or mezzotint. The C4 category thus includes such techniques, insofar as they are made with a drypoint.
C5 – Aquatint This is a well-established and specific technique of direct acid etching.
C6 – Soft-ground or other ground-based etching This category covers forms of chemical process other than hard-ground and direct etching, and aquatint. It includes ÒsugarÓ etching, ‘salt’ etching and other variants of soft-ground.
C7 – Mezzotint This is fortunately a sufficiently specific and recognisable process so that its definition and symbol was not changed.
C8 – Intaglio engraving on linoleum, plastic & other materials This is a general category covering intaglio engraving on other materials than metals. The most frequent examples of non-metallic supports, such as linogravure and engraving of plastics (or acrylics), are specified.

P3 – Heliogravure (manual line and tone photogravure), Photogalvanography
P4 – Commercial photogravure, rotogravure
The two categories of reproductive techniques cover the chemical and mechanical intaglio processes. Ex-libris using these techniques are very common during the 1890-1930 period, except rotogravure, of which only two examples are known. The formulation chosen was determined in a way to avoid linguistic confusion.
P10 -Etched steel printing (die-printing) This new symbol was added in order to cover a widespread category of ex-libris, particularly from the Nordic countries during the first half of the 20th Century, produced by ‘StahldrŸck’.

X -Relief printing (blank) This symbol was kept as the relief counterpart to C. Both are not very widespread in bookplates, but are important in their use for Braille. The symbol ‘B’ for Braille was omitted, as it corresponds to a type of ex-libris and not to a technique. Braille should henceforth be indicated as X or C according to whether intaglio or relief process has been used.

X1 -Woodcut
X2 – Wood engraving
X3 – Linocut
These were kept as they were in the 1958 list. The concept is that X1 and X2 relate to wood, in two different techniques; X3 relates to the traditional linocut, though the French term had to be specified to avoid confusion with intaglio-engraved linoleum (C8).
X4 – Relief-printed engraved or etched metal plates, notably metal cut
X5 – Relief-printed metal plates created for intaglio printing
X6 – Relief-printed engraving of other materials, for example synthetic ones
These symbols were problematic in the 1958 list as they referred to ÒengravingÓ (commonly associated with intaglio) of lead, zinc and plastic. As Òlead engravingÓ (or rather, Òlead cutÓ) is very rare, a modification of the definition field of X4 was introduced. It now refers to the printing in relief of metal plates etched or engraved for this purpose, and X5 _ in opposition to X4 _ is defined as the relief printing of intaglio-engraved or etched metal plates. The latter is a very common category, and a cheap way of making ÒpoorÓ impressions of intaglio plates. As to X6, it was widened to include other synthetic materials (including plastic) and those materials explicitely contained in X2 to X5 and X7 (wood, lino, metal, stone).
X7 – (Chinese) stone stamp This was included at the suggestion of experts in Asian art to define stone seals, in particular Chinese ones. The category must be understood to include all stone stamps.

T -Typography, letterpress This has been placed within reproductive relief techniques which allows differenciation of ex-libris where the artist has used type rather than incorporating the text directly in the matrix.
T1 – Linotype, indirect letterpress This symbol has been attributed to hot metal typography such as monotype and other industrial type, to distinguish them from manually set type.
T2 – Photoxylography, facsimile wood engraving This refers to two processes relating to wood and includes photoxylography which was commonly used until the 1950s.
T3 – Commercial rubber stamp This common form of ex-libris was sorely missing. It must be noted however, that if an artist engraves or sculpts the surface of a rubber, and uses it as a stamp (examples are known), it would bear the symbol X6.
P1 – Line block (cliché) with or without photography Specifically covers both chemical and photochemical processes.
P2 – Half-tone, for example photozincography This covers chemical and photochemical relief processes other than line block, including on aluminium or titanium

L2 – Autography (transfer lithography)
L3 – Zincography
L4 – Algraphy
It was obviously insufficient in the 1958 list to quote such a complex series of processes as lithography as just “L”.
Lithography has thus been subdivided into the four, main, accepted technical categories, according to process (L1, L2) and according to the support. Autolithography includes all direct lithographic processes, such as pencil, pen and chalk lithography, Lithotint (wash-drawing), spatter lithography, scraped lithography, reservage (negative litho engraving), and lithographic engraving. Autography includes all non-industrial forms of transfer lithography. L3 and L4 refer to zinc and aluminium supports.
P8 – Original photograph, hologram The qualification of ÒoriginalÓ was added to distinguish P8 from P which remains as photographic reproduction. The hologram was added, although it is still rarely used as ex-libris.
S – Stencil, “pochoir” Stencil, as a technique, had to be added as it is often used, in particular by Asian artists. It is complemented by ÒpochoirÓ, a stencil variety much used in Epinal illustrations and prints in France.
S1 – Original serigraphy (screenprinting) This symbol was kept for screenprinting (‘silkscreen’), but (as in the case of photographs) adding ÒoriginalÓ, to distinguish it from P9 which was attributed to serigraphic reproduction.
S2 – Mimeography (dye stencil)
S3 – Katazome (oiled-paper stencil)
S4 – Kappa (Katazome made with persimmon juice)
Especially to assist non-Japanese collectors, the terms Mimeography, Katazome and Kappa were given a brief explanatory note.
CGD – Computer Generated Design
Digital technology has made, and is still making, rapid progress and there is a wide range of creative processes which the computer allows. However, only a simple division into original and reproductive process was retained even if perhaps in a few years’ time it will have to be revised. “Computer generated design” is to be understood as an original design created by the artist with digital technology. It may use elements (scanned, for example) which were not entirely created by the artist himself, but the design and composition are overridingly original. It was noted that in this specific field, the signature of the artist on the print is of particular importance to confirm the originality of the work.

P – Photographic reproduction See note under P8
P5 – Collotype Unchanged. An uncommon process, but widely used by artists such as Whistler and von Bayros.
P6 – Photolithography, process transfer lithography Both major industrial forms of lithography were included under this reference. They are difficult to distinguish on the basis of a print.
P7 – Offset A very common industrial process of which Duotone is a bi-colour variant.
P9 – Serigraphic reproduction (photosilkscreen) Added so as to distinguish screenprinted reproduction from original screenprinting (S1).
CRD – Computer Reproduced Design
The earlier symbol, CAD, did not bring an answer to the question: has the computer been used to create a design, or just to reproduce a scanned drawing? The computer can be as creative a tool as the burin, or as servile as a photocopy machine. “Computer reproduced design” is a design of which a copy is effected by digital technology, even if its author has, to some degree, altered the original, or added minor original elements.
Y – Photocopy This symbol was added to indicate photocopy and xerography, as such items are frequently found with documentation in ex-libris collections and must be distinguished from other kinds of prints.

U – Technique not listed above, including Frottage, Chinese Rubbing and Collography This was added as a symbol to identify unlisted techniques and methods of image multiplication which are marginal to printing processes. Obviously, an artist is always free to give additional information, beyond “U”, as to how he made a print.
—/No Number after the technical symbols = number of passes through the press It is interesting to know how many plates an artist used to create a print, but often difficult to tell from just observing the end-result, especially if the register is perfect. The number of colours is also an interesting indication, but sometimes difficult to determine. Finally, the number of times the support (paper) passed through the press was retained as a more precise indication of the workÕs complexity. Normally, this information can only be given with certainty by the creator of the print
/.mon. Monotype The monotype, as a non-repeatable print, falls outside the category of printed ex-libris. Its quality, as a ÒunicumÓ classifies it closer to a drawing or painting. However, there are examples of prints (etchings, engravings) which have been overprinted in monotype. Each print has an added originality similar to hand-colouring.
/ col. Hand-coloured This must be understood as indicating that manual intervention by the artist on the print other than monotype has occurred, such as watercolouring, pencil shading, lavis or other.

In conclusion, although much work and consideration has been given to preparing the revised FISAE list, there is still margin for improvement. However, a moratorium on the suggestion for revisions of 4 to 6 years was decided by the XXIX FISAE Congress in Frederikshavn.