Home/ Ekslibris / What are Ex-libris? 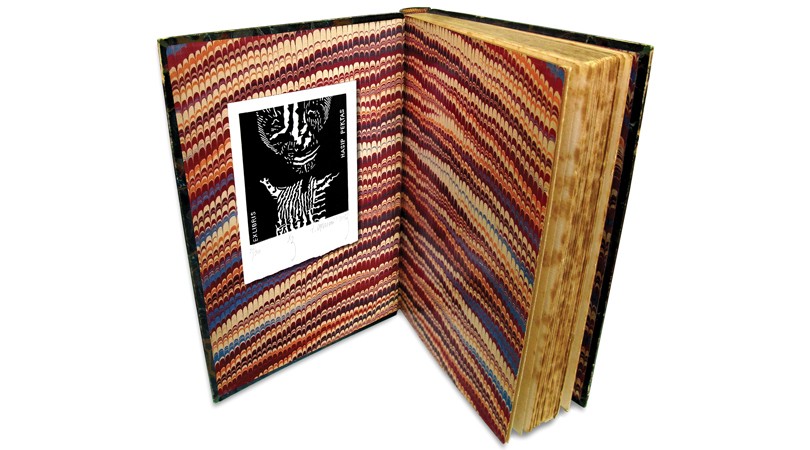 What are ex-libris?
An Ex-libris or bookplate is a small graphic label or print, which is glued to the inside cover of a book with the purpose of identifying its owner. The Latin phrase ‘Ex libris…’, means the books of…, and is usually followed by the name of the owner of the book, who can be an individual or an institution. In general, ex-libris are commissioned artists by persons wishing to mark the ownership of the volumes of their library in a more decorative and elegant way than by just writing their name inside. Printed ex-libris have been used in this way for over 500 years, although earlier hand-painted ones are known and even small ceramic plates which were attached to papyrus scrolls, saying that they belonged to the library of Pharaoh Amenophis III.

Today, contemporary ex-libris are often made by artists more for exchange between collectors than for marking the ownership of books. They tend to be closer to limited editions of free graphics than to bookplates. But real ex-libris for use in books are also commissioned, collected and studied widely.

How are ex-libris made?
All graphic techniques which allow a high quality multiple production of an image can be used, and have been used, by artists over the centuries. The first printed ex-libris were made around 1470, when the first use of mobile print by Gutenberg sparked off the creation of printed books.

Traditional techniques include relief printing (woodcut, linocut, etc.), intaglio printing (engraving, etching, aquatint, etc.) and flatbed printing techniques such as silkscreen or lithography. Often, industrial techniques such as line-block, photo-engraving, offset-litho, etc. have also been used to produce ex-libris, especially when a large number of prints is required. Today’s artists and designers more and more frequently use computer technology for the design of bookplates. A list of technical symbols for various techniques used in exlibris can be found by clicking on “Technical symbols” at the top of this page.

When ex-libris have been produced by an original graphic technique, an edition of 50 – 100 are printed, and they are signed and numbered by the artist. Ex-libris are rarely larger than 13 x 13 cm, as they have to fit into books. Usually they are printed on a fairly light paper (not more than 200 gr per m2), as a thicker paper would prevent the cover of the book lying flat.

What kind of themes and images do ex-libris have?
A bookplate, or ex-libris, can vary a simple label with a person’s name to an elaborate work of art (print) into which the name is carefully integrated into the design. When a bookplate is made for a special collection of books, this is usually mentioned, and can be in a modern language (for example, ‘From John Smith’s collection of books on astrology’), or in latin (‘Ex eroticis John Smith’, for erotic books; it might mention the address of the owner of the book (although this can change!), or the year in which it was made and pasted into the volumes. Usually, the quality of the inscription is as aesthetically important in a bookplate as the quality of the artistic design.

The subject or motif of an ex-libris, today, is infinitely variable. Until the 18th Century, bookplates were mostly heraldic, as usually persons could recognise a coat-of-arms even if they could not read. Later, they became pictorial, and tend to reflect the artistic tastes of the time. The subject which the artist represents in the bookplate is often related to the client’s interests: an amateur astronomer might have a bookplate with a telescope and starsÉ On occasion, it is specified by the person for whom it is made, or linked to the type of books it is to be pasted into. Sometimes the person commissioning the ex-libris suggests a theme and simply lets the artist produce a memorable, beautiful image, with his name integrated into it.

Have many ex-libris been made until today?
It is estimated that over a million ex-libris have been produced between 1470 and today. Basically a European custom, it has spread widely to Asia (Japan, China, in particular) and somewhat to Latin America. Eastern Europe has an especially rich tradition in graphic arts, and some of the best ex-libris produced today are by Russian, Czech, Slovak or Southeast European artists.

A number of museums and public libraries house bookplate collections, some of which are open to consultation. The Frederikshavn Museum in Denmark is said to have the largest public collection of bookplates.

Why do people collect ex-libris?
Apart a few earlier isolated cases, it was in the late nineteenth century that people started collecting ex-libris, as a field of applied graphic arts of historical, artistic, sociological and bibliophile interest. Today, there are some 10’000 collectors all over the world. They often commission somewhat extravagant ex-libris artists mainly for exchange purposes, rather than for the original aim of pasting them into books.

Bookplate exchanges give rise to wide international communication between collectors, who also meet at congresses of collectors, artists and researchers of ex-libris. There are over thirty associations of bookplate collectors around the world, such as the Bookplate Society in England, the Deutsche Ex-libris Gesellschaft in Germany, or the American Society of Bookplate Collectors and Designers in the USA. They publish magazines and books on the subject, and organise competitions for artists.

Spurious bookplates which are made for non-existant persons, or which are dedicated to celebrities but were never received or utilised by the owner, are termed “pseudo-exlibris” and are barred competitions.

Why make ex-libris, or have one made?
Ex-libris have been a constant tradition for over five hundred years. They are a challenge to an artist to produce a small graphic art work for a friend, for a customer or for himself with a special purpose: identifying the owner of a book. Pasting a beautiful ex-libris in one’s books not only discourages theft and reminds borrowers that a book must be returned, but is also a way of paying tribute to the book, which despite modern communication technology remains a primary vehicle for the transmission of knowledge and a constant source of pleasure and interest.
As an object of collection, ex-libris are a wonderful way of acquiring, with time and patience and without being a millionaire, a small-format art museum which reflect the artist’s skills and the collector’s taste.

I would like to collect ex-librisÉ how do I go about it?
If there is an ex-libris society in your country (check on the “member’s list page”), make contact and start there. You might also wish to read a short text containing advice for novice collectors, which can be found at: http://www.artifexlibris.com/blocknotesengarchive20011025c.htm

Where can I find out more?
To read a more substantial history of ex-libris, visit http://www.karaart.com/prints/ex-libris/index.html
and for contemporary plates, beyond what you find on this site, visit those of societies, artists and collectors of which links are given here and other bookplate-oriented ones such as http://jvarnoso.com/exlibris/elmain.html
and http://www.bookplatesociety.org