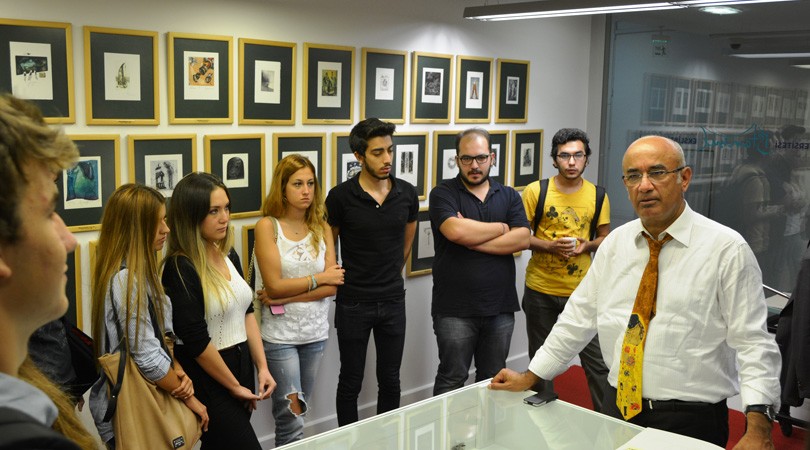 THE NAME AND THE CENTER OF THE SOCIETY

ARTICLE-1) The name of the society is İstanbul Ex-libris Dernegi (İstanbul Ex-libris Society).
ARTICLE-2) The center of the association is İstanbul province.
ARTICLE-3) No branch will be established at anywhere in Turkey.
ARTICLE-4) Objective and affairs of İED
1. To bring together the Ex-libris artist, designers, users and collectors of exlibris. To provide communication and solidarity between Ex-libris lovers and concerning people with Ex-libris art.
2. To give an effort for developing and expanding of Ex-libris art as an art and graphic dicipline.
3. To arouse interest for book, print making and graphic designing.
4. To give an effort for prersentation of Turkey by way of Ex-libris art.
5. To protect and keep the inheritance of Ex-libris works in Turkey.

For realazing the above purposes, the affairs and work are held by İED are as follows:
1. To do research on Ex-libris history of Turkey and to publish them.
2. To arrange conferances, seminars and demonstrations for people who would like to learn, to apply and to evaluate the Ex-libris art. To organize Ex-libris exhibition and competition.
3. To prepare publication and cooperate with the institution or personal for providing the communication and news environment.
4. To invite the Ex-libris expert speakers and Ex-libris exhibition from the foreign countries for well-informing about Ex-libris art.
5. To give an effort to take place at the internetional affairs, to apply to the abroad instutions or associations with the same purpose for membership and to do sharable work with these institutions.

FOUNDERS OF THE SOCIETY

ACCEPTING FOR AND DEPARTING FROM MEMBERSHIP

ARTICLE-6) Persons who are capable of benefiting from civil rights and who are atleast 18 years old and who have made a written application by accepting the provisions of the regulation, Ex-libris artists, graphic designers, Ex-libris users, lovers of books and art may be a member of İED. Persons who applied for the membership,can only be elected pursuant to unanimous approval of the Board of Directors. The applications for memberships are replied within 30 days.

ARTICLE -7 ) Persons who want to depart from the membership of İED, instruct the Board of Directors. They pay the due, if any. Thus, they are departed from İED.

ARTICLE-9 ) The persons resigned and are departed from membership, can not demand fror any right concerning the activities of İED.

ARTICLE-10 ) the persons who have essential contributions to the activities of İED, may be a honorary member. Honorary memberships requested by at leat 5 members of the İED or the Board,

ARTICLE-11) Members of İED have the rights to choose or to be chosen for different parts of İED; to be informed about affairs and financial condition of İED; to purpose and coment on the studies of some parts ofİED.

ARTICLE-13) Way of meeting
a) Members who join the General Assembly are invited to the meeting with the declaration of the day, hour, place and agenda in the local newspaper at least 15 days before. If the meeting cannot be because of not getting majority in this invitation, it’s stated that when the second meeting is held. The time between the first and second meetings cannot be less than one week.
b) The day, hour, place and agenda of the meeting is informed to the civil superior of the place at least 15 days before and the list which shows the members who will join the meeting is added to this article.
c) If the meeting puts off because of another reason, this condition is announced by giving the second declaration to the newspaper which the declaration was given with the reasons of putting off. ‘a’ and ‘b’ subsections are practiced again. General Assembly meeting is held in at least one week and at most two months from the date of putting off. meeting is not put off more than once.
d) Enough number for meeting is one more person of half of the numbers of members. If enough number cannot be taken in the first meeting, majority is not demanded in the second meeting, nevertheless the number of members join the meeting cannot be less than two times of total numbers of members of the board and inspection committee.
e) Members join the General Assembly goes to the meeting place by signing the space opposite to their names in the list arranged by board. Obtaining of majority is fixed with protocol. Meeting is opened by the head of board or the members of board charged by head. A head and two secretaries are elected by General Assembly to direct the meeting. Direction of meeting is a duty of hİED of General Assembly. Secretaries arrange protocal of meeting and sign with chairman. Protocol and documents are given to the board of directors.
f) In General Assembly, only the topics in agenda are discussed; but the topics that 1/10 of the members join the meeting wants are obligatory to be discussed.

ARTICLE-14) In General Assembly following topics are reached to a decision:
a) Choosing and distrubition of parts of İED.Accepting rules and regulations; making changes when it’s necessary.
b) Discussing and accepting the reports of board and inspection committee.
c) Discussing the budget by board, accepting it same or with changes.
d) Giving authority to the board about buying and selling unmovable properties.
e) Joining or departing of İED to the federation.
f) Making international affairs of associations; being a member of associations and foundation in other countries and departing from them.
g) Dispersal of İED. Taking people departed from association as a member or not.
h) Doing other duties in the rules and regulations.

ARTICLE-15) The decisions of General Assembly are taken with one more person from the half majority of the members; but about the changing of rules and regulatoins, joining in and departing from federation and dispersal of İED are required a 2/3 majority of members. Choosing the rules of association is made with closed vote and open counting. Results of General Assembly is informed to all member at least in one month with written report. Voting in General Assembly is done openly unless an opposite decision is taken.

FORMATION OF BOARD AND ITS DUTIES:

ARTICLE-16) Board is formed of 5 main and 5 spare members and is choosed with secret vote by General Assembly. It’s obligatory that spare members are called out for duty in the case of running out in the main membership. Board shares the duty by electing deputy head, secretary accounted in itself. In common, the process of duty is 2 years.

ARTICLE-17) The duties of board:
a) Representing İED or authorizing one or a few of their own members on this subject.
b) Carrying out decisions of General Assembly
c) Doing processes concerned with incomes and expenses of İED, preparing the new budget belonging to the new term and presenting this to the General Assembly.
d) To inform these members to the governorship within ten days in the cases of acceptence of people who are not Turkish citiziens to the association.
e) To agree on opening branches of İED and authorize founders of subsidiary.
f) To the other works that rules and regulations give himself and to use the powers.

ARTICLE-18) Board is called out for asembly by the head or in the absence of him by the deputy head. Assemblies are held when it’s necessary. The decisions of board are valid in the event of taking majority board of the people exist in the assembly. Votings are done openly unless a decision is taken on the contrary.

FORMATION OF INSPECTION COMMYTTEE AND ITS DUTIES

INFORMING THE CHOOSEN PEOPLE TO THE BOARD

ARTICLE-21) Income Sources of İED:
a) Dues of members (40 Turkish Liras for each year).
b) Entrance due which would take from the people who would be accepted to the membership of the İED (100 Turkish Liras).
c) Incomes which obtain from affairs of the İED.
d) Grant and aids.

ARTICLE-23) Receipt documents are delivered to the accountant member with debt after the necessary processesare done and records to the record book. Essential parts and stump of counterfails of receipt documents, stamp with the cachet which have the name of İED, it’s centre and code number. Receipt documents which are used are sewed during five years; handing over is done by new and old accountants.

ARTICLE-24) Expenses must be suitable for the aim of İED and must be documented with bill, receipt or protocol.

ARTICLE-25) Head is competent in the expenses which are more than three times of the member due for each year (on condition that board is informed). Expenses which are exceeded this amount is done with the decision of board.

ARTICLE-26) Bank account is opened in the name of İED. Authority is given to the one person or a few people of the members of board for drawing money separately from this account. Amount of money in stock in the strongbox of İED must be as much as the amount find in the result of multiplying the coefficient of the employee salary with number ‘thousand’.

ARTICLE-27) İED is responsible for helding the following registers:
Record book of members, decision register, register of coming and going documents, budge, register of definite account and balance, register of officestock, register of receipt document. These registers have to be approved by notary public.

ARTICLE-28) Authority of making change in charter is in the General Assembly. The number enough for changing in the charter is 2/3 majority of people in the general assembly.

ARTICLE-29) İED is dispersed when the General Assembly takes a decision of dispersal or when the number of members becomes less then necessary.

ARTICLE-30) In the cases of dispersal, incomes and properties from closed accounts are donated to another association which works for public interest by the decision of general assembly.

ARTICLE-31) The dispersal of İED is informed to the governorship with writing report within 5 days by board.

ARTICLE-32) These provisions come into force in the day it’s accepted by the concerned official establishment it starts to be practiced.

Hasip Pektaş was born in Ermenek in 1953. He has been working as a Professor at Üsküdar University, Faculty of Communication in the Visual Communication Design Department in Istanbul. He wrote a book about "Ex-libris". He has also been working hard to make ex-libris well-known in Turkey. He organized 4 International Ex-libris Competitions and 33rd FISAE International Ex-libris Congress in 2010 in Istanbul. He founded Istanbul Ex-libris Museum in Selçuk Ecza Holding in 2019. He is the President of Istanbul Ex-libris Society. http://www.hasippektas.com
Follow Me