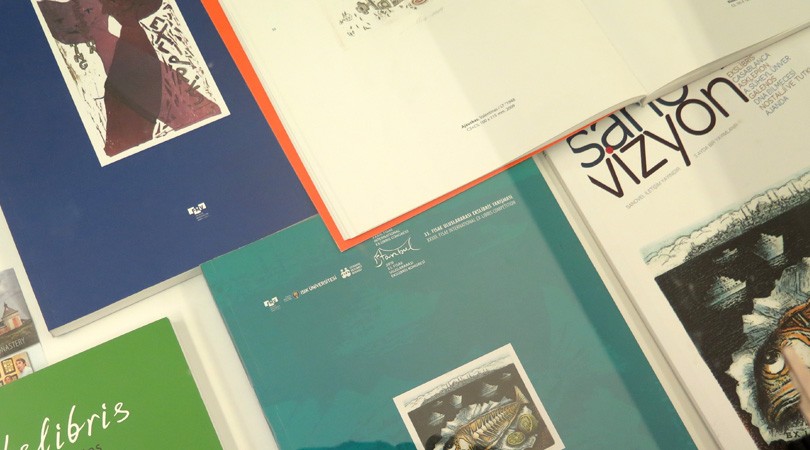 Ex-libris is a branch of art that promotes and glorifies the owner of the book. The book lovers are small-sized prints with their names and pictures of different subjects on the inside cover of their books. As a word, it means belonging to the library of …, from the library of …

It is the business card or deed of the book. He introduces the owner of the book, glorifies him, and warns the borrower to return the book. Ex-libris is an important communication tool. Although it was born as a need graphic, it is original works made with aesthetic concerns.

Ex-libris has been introduced to Turkey either by Turks going abroad or via books purchased from the West. Books containing ex-librises, which are used widely in European countries, have been brought to Turkey through second-hand sales, and when book owners passed away, their relatives either donated those books to libraries or sold them to antiquarian booksellers.

Ex-librises are found in some books on Turkey bought from auctions conducted in the West. For example, it is possible to see an ex-libris in a book, which is in the National Library, on Ottoman History printed in 1777 and bought from Germany in 1954 in exchange of 210 Deutsche Marks. There are ex-librises in some books of the library of Henry M. Blackmer that are related to the Ottomans, purchased by the Ministry of Culture from the Sotheby’s auction in London in 1989. There are ex-librises in some of the books bought from abroad, particularly those in French, and donated from the Cavit Baysun library to the Yapı Kredi Bank Library and from the Sedat Simavi and Şevket Rado libraries to the Press Museum.

The stamps present on handwritten manuscripts and printed books that date back to the Ottoman era may be recognized as signs of ownership. Although stamps do not belong to the ex-libris type, with their original calligraphic structures, they have functioned as the personal coat of arms or logotype of the person they belong to.

It can be argued that those who have first got ex-librises made in the real sense in Turkey were the expatriate bibliophiles of that period. That the teachers served in such foreign schools as the Üsküdar American Academy and the Robert College has got ex-librises made can be seen when the internal covers of the books donated to the libraries of these schools are examined. In the majority of the books of the Robert College library, which now belongs to the Boğaziçi Univertisy, a standard ex-libris is found. Starting from the 1920’ies, student yearbooks of the Robert College featured ex-librises that also contained blank placeholders for the owner of the yearbook to inscribe their names. Designed and applied by those in charge of the artistic aspects of the yearbook, this tradition was unfortunately suspended by the 1950’ies.

Neither enthusiasts nor collectors of this recently spreading art are many in Turkey. The number of bibliophiles as well as others, who get ex-librises done as a measure against theft by borrowers of books from their libraries, is increasing every other day. For example, İ. Gündağ Kayaoğlu, folk-culture expert and researcher-writer, get the ex-libris comprising a cartoon of Tan Oral and the inscription “Yâ Kebikeç” in Arabic on it done in 1985. (In the past, the word “Kebikeç,” which was thought to be the “Sultan of the Bugs” was inscribed on handwritten manuscript books to protect them from worms. The bugs were believed to scare from the Kebikeç and avoid approaching the books with this word on them.)

From time to time, persons who have just heard about the existence of such an art are witnessed to get interested in ex-libris with great enthusiasm. Nevertheless, these individuals will first deal with its functional side, and in time, just like the other collectors, they will adobt it and start accumulating in line with their areas of interest. As long as book owners, collectors, and artists continue to be enamored of ex-libris, I am sure this tradition will be well established in Turkey, as well.

The Istanbul Ex-libris Society has opened exhibitions in 15 cities in Turkey as well as in the Turkish Republic of Northern Cyprus (TRNC), Denmark, China, Germany, Italy, Belgium, Finland, Belarıs, Canada, and Russia and thus publicized ex-libris. Numerous conferences have been delivered to promote the art of ex-libris and workshops, particularly in schools, have been conducted. The Istanbul Ex-libris Society also organized 3 international ex-libris competitions in 2003, 2007, 2010 and 2018. In 2010, the Society organized the 33rd FISAE International Ex-libris Congress in 2010, and hosted 280 artists and collectors from 40 countries in Istanbul. Next to the International Ex-libris Competition Exhibition in 2010, the Collections of Japanese collector Ichigoro Uchida, Austrian collector Heinrich R. Scheffer, Moscow Ex-libris Museum, China Ex-libris Association, and Shanghai Fu Xian Zhai Ex-libris Society as well as Stamped Old Book Pages, which reflect our tradition of stamping, a type of ex-libris, were exhibited. Işık University also organized a national ex-libris competition for high-school students in 2012.

Yapı Kredi Cultural Activities Arts and Publishing Inc. published Hasip Pektaş’ book “Ex-libris” in 1996 and the extended Fourth Edition of the book was printed by the Istanbul Ex-libris Society in 2017. In addition, the 10th issue of EX-LIBRIST, (http://exlibrist.net), the refereed online magazine of the Istanbul Ex-libris Association, edited by Hatice Öz Pektaş has been published.

The membership of the Istanbul Ex-libris Society was accepted in the FISAE (International Federation of Ex-libris Societies) Congress held in Boston in the year 2000 and Turkey participated to this organization, of which nearly 40 countries are members.

Since the 2000s, young people who make exlibris have started to grow up in our country, especially with the encouragement of printmaking and graphic design teachers in institutions that provide fine arts education. Now, our artists receive awards in ex-libris exhibitions and competitions abroad, and they make our voices heard in the work done in this field. In addition, ex-libris, which is quite new for our country, is taught as a course in 6 universities. Up to now, 19 post-graduate theses have been made on ex-libris. In secondary education, teachers who know and are interested in ex-libris also have their students make ex-libris.

The Istanbul Ex-libris Academy Association, which was established in 1998 and became a member of FISAE in 2018, also strives to spread ex-libris. In 2000, he organized “Ex-libris Istanbul”, in 2002 “Ex-libris Nazım Hikmet”, and in 2010 an exhibition called “Ex-libris Akdeniz”. However, it should not be forgotten that there is no ex-libris made for tourism purposes and on behalf of a deceased person in the world. Ex-libris can only function if it is done on behalf of living persons and institutions.

Hasip Pektaş was born in Ermenek in 1953. He has been working as a Professor at Üsküdar University, Faculty of Communication in the Visual Communication Design Department in Istanbul. He wrote a book about "Ex-libris". He has also been working hard to make ex-libris well-known in Turkey. He organized 4 International Ex-libris Competitions and 33rd FISAE International Ex-libris Congress in 2010 in Istanbul. He founded Istanbul Ex-libris Museum in Selçuk Ecza Holding in 2019. He is the President of Istanbul Ex-libris Society. http://www.hasippektas.com
Follow Me